<<legally recognised union of a man and woman>>

Marriage is God’s idea; ever since He created Eve for Adam, saying it was not good for the man to be alone, men and women have been coming together in marriage (Gen 2:18-24). Marriage is a cornerstone of society with so much of a community’s success depending on it, for if it is weakened or broken this will adversely affect civilization in general, resulting in an increase of rudeness, self-centeredness, and heartbreak experienced by bewildered adults and children.

The formalities of marriage

Following an engagement period, there is a public expression to the wider community in some form of wedding ceremony indicating a full, unconditional surrender to each other followed by the consummation – the coming together physically. The legally recognised union or contract between spouses establishes rights and obligations between them.  It is an exclusive relationship that eliminates all competition, voluntarily entered into for life, however many are legally dissolved through divorce. Increasingly today, fewer and fewer marriages are of sexual virgins – many either having had numerous partners or have been sleeping together prior to the wedding. Marriage is a commitment, not a tryout that is disbanded in a storm. A civil marriage is just as binding in God’s eyes as a religious marriage – it is the joining together of a man and woman for life, to the exclusion of all others.

Marriage is a public and official act, where both bride and groom promise to take responsibility for the other in a loving relationship.  This involves ‘leaving’ and ‘cleaving’ – being physically separated from the parents to start the nucleus of a new family; the man and woman becoming ‘one flesh’ in the intimacy and commitment of sexual union that is reserved for marriage. Through separating yourself from the physical and emotional closeness of both sets of parents, and directing that intimacy to your partner you will form the closest ties with them on each level – spirit, soul, body and in that order (Gen 2:24). Unfortunately, many people today enter into the physical dimension first and seldom progress beyond this level because of a lack of self-control which is contrary to God’s ideal. Lovers should first be united spiritually, then in their minds, and only after their marriage in body. The Bible states clearly the dangers and total foolishness of sex outside God’s boundaries, and for a believer it is sinning against the Holy Spirit’s temple (Prov 6:23-29,32; 1 Cor 6:18,19). Marriage is no cure for lust or impure desires.

Marriage is not only for mutual love and sexual relationship, but is designed by God to produce and raise children. Inside this stable unit is the best environment for children to be brought up, rather than by a solo parent (Mal 2:14,15). Marriage calls for self-sacrifice for the blessing of the other partner, and the nurturing of the family as ‘godly offspring’. This will benefit both through the giving and through receiving of love. A husband and wife are 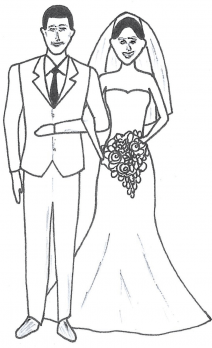 exhorted to be faithfully committed to their own marriage, for it is only within this relationship that real fulfillment can be found (Prov 5:15-21).

In the OT it was permitted to have more than one wife, although this was not approved by God.  Solomon’s many wives resulted in his ruin (1 Kgs 11:1-10). Today most cultures and nations stipulate only one marriage partner. Society does not recognise adultery and fornication as constituting marriage although it may condone people living together in a de facto relationship. Until a couple exchange vows pledging to love each other, to be faithful and serve the other they have no legal or spiritual basis for an intimate sexual relationship. The marriage is a public commitment of ‘I do...’ to each other.

The practicalities of marriage

Love, commitment and communication are essential for a successful marriage, while unfaithfulness (often termed cheating) breaks the trust that is the foundation of all good relationships (Heb 13:4). There must be unity and a common goal and purpose or else the marriage will be far from ideal and probably will destroy itself (Mk 3:24,25).

It is the essential for newlyweds to be protected from excessive burdens, responsibilities and pressure for a period so they can establish a strong relationship with each other (Deut 24:5).  It is advisable to delay having children for a time too, for once the first child arrives there is a continual demand on the parents for years to come.

Romance should be ongoing throughout the marriage (not just during the courting period). Regular words of affection and numerous hugs with the occasional bunch of flowers, an unexpected gift, treat or short note will do wonders. You will reap enormous emotional security and other rewards if you work at making you marriage enjoyable for your spouse.  The principle of sowing and reaping never fails – self-sacrifice for the others benefit. Confront and work through areas of conflict before they become major problems. Encouraging words and saying ‘I love you’ must be genuinely backed up by actions.  Give your partner the freedom to develop their full potential without stifling initiative and creativity through control.

Married couples are to be responsible and meet each other’s sexual needs and desires with tolerance, consideration and love being mindful of the different stress factors of each as well as the female monthly cycles (1 Cor 7:5). Our bodies are not primarily for self-gratification but are our gift to our spouse – to the degree that we consider they ‘belong to our partner’ (1 Cor 7:4).

We are our spouse’s only sexual option

Parents (in-laws) are not to meddle in the affairs of their independent children; they can pray for them while only giving advice and assistance if asked.

The difficulties of marriage

Often there is great effort put into the wedding – an event that is over in a few hours, yet little into the marriage that should last a lifetime. The reality of marriage reveals what romance conceals.

Don’t retreat from troubles – rather resolve them. Couples who are considering divorce should be accountable to their vows – ‘Till death parts us’ as “Those who God has joined together let no one separate” (Mt 19:6).

God’s intention for marriage is a lifelong commitment to the same partner, not
choosing divorce when things get tough, for every marriage will have its good and not so good periods.  Both parties should be fully committed to making their marriage successful and working through issues that are causing concern.  If needed, seek help

from competent counselors, good books or other resources to work through conflicts. A Christian marriage should be seen as the union of two forgivers. Forgiven of their huge sin-debt by a loving God, they should extend forgiveness to the one they love yet has caused some comparatively small offence
(Col 3:13,14).

The biggest problems to martial harmony are self-centeredness and insensitivity. There will be times of strained relationships when both parties have differing agendas and strong opposing views. However, if both are committed to God this automatically makes them committed to each other and to working out a satisfactory solution. When the attitudes or actions of the other irritate, alienate and fester within you it calls for frank openness, acceptance, an unconditional pledge of loyalty and forgiving love. The difficulties of life, rightly met will draw a couple together. Be loyal to your spouse, not belittling them either when they are present or absent. Understand you spouse is not your enemy!  Instead put your joint energy into combating the issues that are coming against you. A perfect marriage is just two imperfect people who refuse to give up on each other.

Financial issues and emotional stress will also affect the harmony in the home as will lack of sleep and differing child raising values. ‘Real listening’ will aid the management of conflict which is important as parents, consciously and unconsciously, become the role models for their children. The values, attitudes and activities in the families we grew up in can help to shape our marriage – either to repeat and incorporate the desirable qualities into ours, or to change by having a different approach.

The Bible warns against being unequally joined with a non-Christian (2 Cor 6:14-18). To a degree, this inequality also relates to another Christian who is not on a similar spiritual, intellectual or social level or is from a vastly different culture. Choose your partner wisely – you will have a long time together.  Unity in commitment and obedience to God are vitally important.

God holds the husband responsible for the family; the wife is to be in submission (by choice not force).  The husband is to be submitted to God.  This covering is the best for each, providing security and protection within the framework of love (1 Cor 11:3; Eph 5:21-33). This does not mean man is superior to the woman – both are created equal yet with different and unique roles and abilities that complement each other. These need to be clearly understood and agreed for the well-being of the marriage and consequent family.

Marriage and the Church

Often today, there is a tangle of marriage, divorce and remarriage among converts and repentant members with blended families, as each brings children and emotional baggage from the previous relationship. The church is compelled to accept the situation as it is but is also uniquely placed to minister to such people, sharing the love of God and providing training based on God’s principles for marriage. Put effort into protecting and strengthening your own marriage, so that from this solid foundation you can minister to others. Is Christ revealed through my life within the marriage relationship – through words, actions, attitudes, forgiveness, humility and submission?

In some churches, those who are remarried divorcees are not permitted to hold places of leadership, especially if this took place after them becoming Christians. Other churches prefer not to provide marriage services for non-believers, instead recommending a civil ceremony.

As society moves further from God’s ideals in all spheres of life ‘marriage’ between same sex partners is legalized by governments, but this does not make it right in God’s eyes. According to the Bible it is sin and those who persist in this lifestyle of homosexuality or lesbianism will not be in heaven (Lev 18:22, 20:13; Rom 1:26,27; 1 Cor 6:9,10). The sinful nature within causes us to have twisted and warped thoughts and desires; however we are to control all ungodly feelings for which we will give account. The Bible only recognizes marriage as between a man and a woman – then instructs “Husbands, love your wives, just as Christ loved the church and gave Himself up for her…In the same way, husbands ought to love their wives as their own bodies” (Gen 2:24; 1 Cor 7:2-16). When the truth is rejected, it is replaced with a lie (Rom 1:18-32). Everyone inherently knows that such a lifestyle is immoral and unnatural.

To marry or not to marry?

In some cultures to be unmarried is a shame but this is not so in God’s eyes. Paul appears to have been unmarried but other men of God had wives (1 Cor 7:7). Unmarried people are no less whole or contented than married people.  Each state has its own advantages and joys, but also disadvantages and heartaches – allow God to use you whether you are single or married. God is to remain our main focus (Ex 20:3).

The unique and intimate relationship of marriage serves as a picture of the relationship between God and the Jewish nation in the OT, and between Christ and His church today and into the future (Isa 62:5; Eph 5:23-32;  Rev 19:7-9). When the Israelites were unfaithful to God and worshipped other gods, this was termed (spiritual) adultery (Jer 3:6,8,9, 5:7, 7:9). Am I guilty of spiritual adultery too?