Only in Jerusalem was there a temple though many synagogues are located throughout Israel and various countries today. 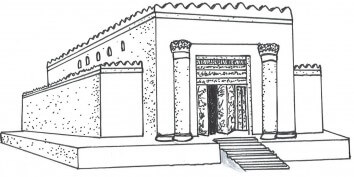 The first permanent worship building was built by Solomon on Mount Moriah (also called Zion) in Jerusalem. This new religious centre of the entire nation replaced the portable tabernacle that had originally been constructed for use in the wilderness and had served the Israelites for almost 500 years. David had desired to build the temple but because he had been a warrior and killed many people God did not allow him to do so (1 Chr 28:2-3).  However, he made preparations for the work and his son Solomon constructed it over a seven year period, completing it in 959 BC. The Ark of the Covenant was then moved into the temple and it was dedicated (set apart) for the worship of God and His glory filled this earthly structure (2 Chr 5:1-14, 7:1).

1/. The Most Holy Place, containing the Ark of the Covenant symbolising God’s presence.

Even though His presence couldn’t be contained in any structure this was a visible symbol of the invisible God, who is omnipresent.

2/. Folding doors and a curtain separated it from the Holy Place, which contained the ten tables for the shewbread (bread of presence), ten golden lamp stands each with seven branches, and the altar of incense.  Various additional side rooms were used as storerooms and living quarters for the priests.  3/. In the court were a large vat and ten smaller ones, each containing water for washing and an altar for the burning of offerings.

The court was frequented by the people bringing their offerings, while only the priests could enter the Holy Place. Only the high priest could enter the Most Holy Place, once per year, on the Day of Atonement, to make atonement for the sins of the nation (Lev 16:1-35). The temple was administered by the priests and Levites, as the tabernacle had been (1 Chr 23:28-32). Three times a year all the male Jews were to make the journey to the temple to participate in the religious feasts or celebrations.

The king was warned, if you and your people don’t follow me wholeheartedly the temple and the whole nation will be destroyed (1 Kgs 9:6-9). When Israel turned away from God His glory and presence departed from the people, they were conquered and the temple was destroyed by the hostile Babylonian armies in 586 BC (2 Kgs 25:9-21).

In 516 BC, the temple was rebuilt under the supervision of Zerubbabel and called the Second Temple (Ezra 3:8-6:18). This was on the same foundations but less expensive materials were used. This temple also fell into disrepair and was subjected to looting, until it was cleansed and rededicated in 165 BC.

About 19 BC Herod the Great, to gain favour with the Jews, began to restore and enlarge the second temple so it became known as Herod’s temple. Jesus taught in this temple and declared it would be destroyed yet again (Mt 24:1,2; Lk 19:47, 20:1,2). When He was crucified, God’s glory again departed from the temple and the curtain separating the Holy Place from the Most Holy Place was supernaturally torn when He died (Mt 27:51). This symbolic barrier between God and man was removed, pointing to free access to God through Christ (Heb 9:1-14, 10:19-22).

In 70 AD the Romans destroyed the temple and to this day it has not been rebuilt. Sacrifices ceased as the temple was the only God-authorized place for them to be offered (Deut 12:4,5,13,14).  Christ’s disciples, who lived to see His prediction come true, were convinced that all He said would come to pass.  A lesson for us, if we want the continuing presence of God in our lives, is don’t turn from His ways.

The Jews are making preparation for a third temple to be built. This confirms what many believe to be the future fulfilment of Ezekiel’s vision and end-time events, although what is termed Ezekiel’s Temple, (intended to typify God’s perfect plan for His people where all of life is centered on Him), is a controversial topic (Ezek 40:1-48:35).  At the present time the Islamic Dome of the Rock mosque is on the Temple Mount and is off-limits to all non-Muslims, although the Jews have access to the Western or Wailing wall, the large retaining wall built to enlarge the Temple Mount. This is one of the few remaining portions of what had been the physical focal point of the Jewish religion.

Believers’ bodies are the temple of God, where the Holy Spirit resides, so we should dedicate our lives to His purposes, ensuring we don’t pollute or corrupt them by wrong attitudes, harmful substances and foolish actions, instead purifying ourselves, for God will destroy those who don’t respect

their bodies as such (1 Cor 3:16,17, 6:13-19; 2 Cor 7:1). Because we recognise that a holy God lives within us sinfulness is not tolerable and such behaviour calls for immediate yet genuine repentance so we can live with the consciousness of restored fellowship, not the alienation of grieving the Spirit (Eph 4:30; Col 1:27; 1 Jn 1:9).

Scripture likens individual Christians to ‘living stones’ being built together to become a spiritual temple, the worldwide church of redeemed believers (Eph 2:19-22; 1 Pet 2:4-8). In eternity there will be no need for an actual temple in the New Jerusalem because God’s presence will be everywhere and He will be worshipped throughout the city (Rev 21:22).