The world was full of corruption and violence and God was sorry that mankind had rebelled against Him rather than walking uprightly as Noah did (Heb 11:7). God decided to judge the sin and sent a flood that totally covered the whole earth. The ark safely protected Noah and his family (a total of eight humans) and the animals inside, together with the necessary food. He was instructed to take either a single pair (male and female) or seven pairs of each kind of animal, birds and creatures to repopulate the earth to keep their various kinds alive, after the flood.  When they were inside God closed the door and the rain commenced. It rained solidly for forty days and all humans and air breathing creatures outside perished by drowning. Meanwhile the humans and animals were secure inside the ark in which they were confined for over a year. 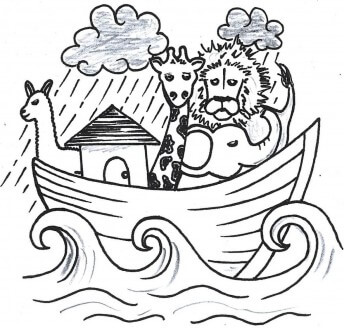 The Ark landed on the mountains of Ararat, which are located in present day Turkey. No remains have been discovered after the event which happened approximately 4,500 yrs ago. The rainbow which appeared is God’s promise He will not destroy the whole world by a flood again (Gen 9:8-17).

Inherent in man is the tendency (the predisposition) to sin and it wasn’t long before sin was again rampant. At the end of this ‘age of grace’ similar conditions will prevail – people indulging in living for the present life and not making any provision for the future life (Mt 24:37,39). Many people will perish because they have not prepared by being safely inside the ‘ark’, which is a picture of Christ.

The Ark of the Covenant (also called Ark of the Testimony) was a rectangular box, kept in the most holy place of the tabernacle, the Israelites wilderness place of worship (Ex 25:10-22). It contained the two tables of stone on which the 10 Commandments were written, a container of manna (the wilderness
food God provided), and Aaron’s rod (Heb 9:4). Two crafted cherubim’s (angels) with outstretched wings adorned the lid (or mercy seat). It was here that God’s presence was focused and honoured and His will revealed to Moses (Ex 25:22; Num 7:89). What Moses constructed was probably a replicate of the heavenly ark of the covenant that is mentioned being in heaven (Heb 8:5, 9:23; Rev 11:19).

Whenever the Israelites moved, the Ark, considered the most sacred possession of the Israelites, was carried on the shoulders of the Levites, by rods permanently inserted through rings on each corner. Once when the ark was transported by another means, not as instructed, judgment fell (2 Sam 6:3).
To be blessed we must do things in God’s appointed manner, if He has stipulated certain guidelines. When the Israelites settled in the Promised Land and the temple eventually built in Jerusalem, this ark was housed there (2 Chr 35:3). Some 40 years later, the Babylonians captured and destroyed Jerusalem and the whereabouts of the ark remains unknown, except to God.