<<rising from the dead>>

The resurrection of Jesus, after being dead for three days, is a fundamental truth of Christianity, and its acceptance is a requirement of being saved, for He is the resurrection and the life, the only way to heaven (Jn 11:25,26; Act 4:12; Rom 10:9). Paul outlines several consequences if there was no resurrection: if Jesus did not rise our faith is in vain, preaching about Christ is useless, the witnesses and preachers of the resurrection are liars, no one would be redeemed from sin, dead believers would have perished and Christians would be the most disappointed people on earth (1 Cor 15:13-19). “But [he says] Christ did rise from the dead, becoming the first-fruits of those who have died…In Christ all will be made alive…your labour in the Lord is not in vain” (1 Cor 15:20-22,58). The belief in the resurrection has been the glorious hope of Christian martyrs for centuries.

Of all the world’s religions it is only the Christian faith whose founder transcends death and declares all who have died will, in the future, also be resurrected – to either eternal life or eternal death, depending on their relationship with Christ. The leaders of all other religions remain in the grave. Praise God, Jesus is alive and is at the right hand of God the Father in heaven (Rom 8:34). 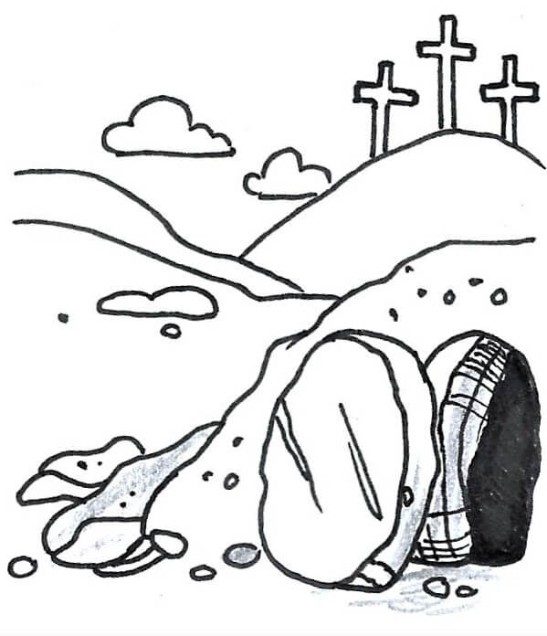 The empty grave was one proof among several that He had risen. Others include the testimonies of the early disciples whose lives were transformed after being with the risen Christ besides independent historical writings of that period stating that the man Jesus was raised from the dead. By His death, He destroyed Satan’s power, and rose victorious. Hallelujah! This gives us great hope too.

At the crucifixion, the disciples were dispirited, confused and bewildered. Jesus repeatedly told His followers, “I will be killed, but three days later I will rise again”, yet they did not comprehend it till after the event (Mt 16:21, 17:22,23, 20:17-19; Lk 24:6,7). He died in full view of trained executioners, had a guarded tomb with the religious leaders taking every precaution to ensure His body remained in the grave, yet man’s opposition can never hinder God’s purposes (Mt 27:62-66). The resurrection is proof of who Jesus is and that He did accomplish what He set out to do: provide the only means of redemption for mankind.

Christ went to the cross for our sins, but was raised again for our justification demonstrating that God accepted Christ’s sacrifice on our behalf (Rom 4:25). In the 40 days after His resurrection, before His ascension to heaven, Jesus appeared to His disciples several times and proved He was alive.  It was this proof, along with the empowering of the Holy Spirit, that gave the disciples hope, and their lives took on a new meaning and purpose with the resurrection prominent in their teaching (Act 1:3,8, 2:4,24, 4:13,29-31, 17:1-4; 1Cor 15:3-8). As wonderful as the crucifixtion was the resurrection is greater.

When a person dies their spirit/soul returns to God (being held in a temporary place as either paradise for believers or sheol for the unbelievers), while the mortal body decays. After being resurrected the spirit/soul and new bodies will be reunited and will never decay or be subject to death because they take on incorruptibility or immortality (1 Cor 15:51,53). People living at the time of the second coming will also receive immortal bodies that will not physically die.

The Bible states “Blessed and holy are those who have part in the first resurrection”; because they are believers they will spend eternity with Christ (Jn 14:2,3; 1 Thes 4:13-18; Rev 20:4-6,14). There is another (the second) resurrection in which the wicked (unbelievers) are raised at the end of the 1000 year reign of Christ to be judged before the great white throne prior to being cast into the lake of fire which is the second death (Rev 20:12,13,15, 21:8). Jesus referred to this as the resurrection of damnation – an eternity of anguish and regret (Jn 5:29).

The Bible records various people being brought back to life again, but these were just restored human bodies with no different characteristics than before, and all subsequently died again (1 Kgs 17:21,22; Lk 7:14,15, 8:54,55; Jn 11:43,44; Act 20:9-12).  This is in contrast to a resurrected body which has different physical characteristics and which will

not experience death ever again. After His resurrection Jesus was still recognisable, being able to be touched, eat food, and was flesh and bones, while also having new characteristics – He was able to appear in a locked room and disappear out of sight (Lk 24:31,36-43; Jn 20:19-27). Our resurrected bodies will be like His resurrected body (Phil 3:20,21; 1 Jn 3:2).

Paul’s desire was, “To know Christ and the power [glorious manifestation] of His resurrection” (Phil 3:10). He wrote, “You have been buried with Christ in baptism and raised with Him through your faith in the power of God so set your hearts on

Baptism is symbolic of the old natural flesh and body being put to death and, like Christ, being raised as a new person because “We too may live a new life…dead to sin but alive to God in Christ Jesus” (Rom 6:4,11). Communion is not just a commemoration of Christ’s provision through His death but a thankful remembrance of the blessings conveyed by a living and victorious Lord who rose triumphant from the grave. Sunday, the day of His resurrection, is observed as the Lord’s Day, replacing the Jewish Sabbath (Saturday) as the day of religious significance.