Casual or scandalous talk about another person. These uncomplimentary comments include criticism, false reports, rumours and exaggerations and are malicious in nature, accentuating the negative aspects of an absent third party’s character or actions. Gossip can even be disguised as ‘items’ for prayer. Gossip springs from jealousy, pride and selfishness, and is expressed because of a lack of self-control.

It is passing on questionable information and twisted facts when you are neither part of the problem nor part of the solution. Often the ‘news’ is altered or elaborated as it is passed on and can be character assassination, showing a lack of respect for others (2 Thes 3:11,12; 1 Tim 5:13). We are not to spread false reports against a neighbour for it stirs up discord (Ex 20:16, 23:1; Prov 6:16,19). 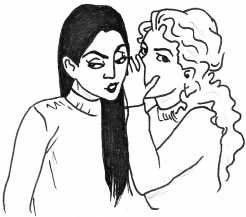 Before engaging in this degrading activity ask, would we like others to pass on this kind of information if we were the one involved?  Would I pass it on if I knew the person concerned could hear me? Will it be helpful if I pass this ‘news’ on? Will God be glorified? If I share this juicy chitchat, what does it portray

of my character? What is the motivation for uncharitable rumours and slurs about a person’s character (Ps 15:3)? Remember we must give account for every idle word we speak (Mt 12:36). The Bible’s advice is, “Avoid godless chatter, because they who indulge in it will become more and more ungodly” (1 Tim 6:20; 2 Tim 2:16).

Before listening to gossip ask, ‘what is your reason for wanting to tell me – is it true?  What was your source? Have you gone to the person concerned? Can I quote you?’ If people gossip to you about others, they will also spread your morsels of information to others! We are to confess our faults, not spread those of another (Jas 5:16)! Agreeing with gossip is degrading the person against whom it is spoken.