Like a river dammed up, once there has been a breach in the obstruction the constrained water will soon forge a bigger escape route in a relatively easier manner. The initial piercing of what seems impenetrable requires specific targeting and persistence to see the walls crumble, for what gives is the part with the least resistance. 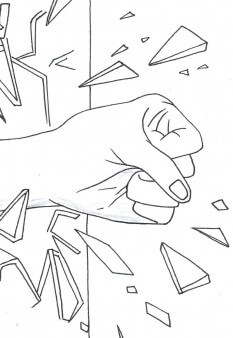 Even though the forces of evil are powerful they are no match for the power of God which we can call to our aid, “The people that know their God will firmly resist [the evil]” (Dan 11:32). Declare into the spirit realm the victory in the Name of Jesus. Pray in the Spirit, being involved in battle through spiritual warfare (Eph 6:10-18; Jud 1:20). Bring the promises of the Word of God to bear on what would hold
back, delay or obstruct the manifestation of victory. When the initial breakthrough comes it will be followed by increasing momentum and freedom. It is at this stage many who have been spectators up to now, will join in with those who have
faithfully toiled and prayed to see this release.  Have a determination – ‘I won’t give in till the blessing comes’ (Gen 32:26).

Individually we need a breakthrough to have a greater awareness of and relationship with God so He can penetrate into
our minds, and we become more obedient and sensitive to His Spirit with a release to enter further into the purposes of
God and fulfill our unique calling. So much hinges on penetrating the defensive walls that separate us from where we are
and what is our God given inheritance

Another area of needed penetration is for the light of the gospel to pierce the realms of darkness releasing those held captive
in sin and so the triumphing of righteousness in our communities. We have the authority in the name of Jesus to advance His Kingdom – He expects us to do what He has been doing, continuing to make God known to humanity in a relevant way (Mt 28:19,20; Mk 16:15-18; Jn 14:12). “The Kingdom of God has been forcefully advancing, and forceful men lay hold of it” (Mt 11:12). This thrust is by people knowing, doing His will, having a disciplined united, and ‘at any cost’ approach.

When walking in victory ourselves, it’s our right and responsibility to ‘break down the walls’ and set other captives free. Prayer, fasting and confession will be required to see a breakthrough as we diligently seek the Lord but through God we shall do valiantly (Ps 60:12; Dan 9:3-23). As we come to know the mind of Christ, we are faced with the challenge, are we prepared to pay the price to see it become reality? Surrender to Him and endeavour to realise the eternal significance of what is at stake. When a child is born there is a time of intense pressure and pain, followed by the joy of new life, so it is in the Christian life (Jn 16:21).  Unless there is travail or birth pangs new life will not come forth. Do not give up hope until your breakthrough comes.

1/. Persistence. There needs to arise a determination of inner resolve that you won’t settle for defeat or partial victory for Jesus stated breakthrough only comes in some situations by

Continue until the answer comes

prayer and fasting (Mt 17:21; Mk 9:29; Lk 11:5-8, 18:1-8). Fasting is going without food, or denying the body, for a period of something else it craves. This is not trying to manipulate God but does indicate you are serious, desirous of His intervention and power to bring about that which you long for. In all matters, we must be submissive to His will. Until there is a release, what is in the mind of God can’t become reality. We will never regret pursuing the breakthrough, which will not happen without our aggressive prayers, a righteous lifestyle and persistent faith. However the ultimate victory is because of the Lord, as “It is not by might or power but by My Spirit says the Lord” (Zech 4:6).  “The Lord strengthens [shows Himself strong on behalf of] those whose hearts are fully committed to Him” (2 Chr 16:9).

2/. Corporate intercession. Sometimes it calls for a creative approach to bring about the release of the authority invested in us by Christ. Enlist the help of others, as with a concerted approach the effect is multiplied (Lev 26:8; Deut 32:30; Mt 18:19,20). Such a concentrated effort is like focusing the sun’s rays through a magnifying glass onto a small focal point igniting into fire whatever it is directed on. The greater the focus, the more powerful the influence is. Similarly in intercession have a concentrated and enduring focus on a particular area rather than having a broad approach over a multitude of needs.

3/. Shatter the gates of hell. The heavily fortified walls of Jericho were impervious to the Israelites walking around them. However, the Israelites were obedient to the divine directive, and God acted on their behalf – what was ‘solid as a rock’ crumbled at their feet (Josh 6:1-20). Thus, it is essential to hear what God says and act on it. Don’t be complacent, satisfied with your present position or content to be confined and restricted with the regretful result of being cheated out of what is God’s will for you. Choose and strive for liberation and transformation, knowing Him the source of life, “This is eternal life that they may know you” (Jn 17:3). We are in a spiritual battle; there will be a real intense struggle and spiritual attack because Satan doesn’t want you to advance in God as this will mean defeat and reduction of his territory.

4/. Binding and loosing. Jesus gives us the authority to use His name to enforce His will, speaking to the ‘mountains’, that obstruct His objectives becoming reality (Mt 16:19; Mk 11:23,24, 16:17,18; 1 Jn 3:8). What seemingly immoveable thing is hindering or preventing the fulfillment of His purposes in my life? Declare that with Jesus you will overcome. This must not be in presumption or from selfish motives, rather a confident belief and expectation that it is only a matter of time and the much-anticipated release will come. Maintain your faith in Christ; keeping your eyes on Him, rather than this obstacle in the way, and do all you can to bring the desired result. There is always a partnership or co-operation between the divine and human – we are the channel He flows through – “the Lord worked with them” (Mk 16:20).

5/. Focus attention on the Commander-in Chief. Rather than our eyes being on what is against us we should be looking to Jesus our conquering Saviour  and h old onto God’s the promises and fight for them to become reality (2 Cor 1:20 Heb 12:2). Get a vision of what currently lies out of reach. As you see what is possible, faith will rise with a genuine desire coupled with determination to possess. Jesus looked beyond the pain of the cross and viewed the multitudes who would enter into eternal relationship with Him (Heb 12:2). We don’t know when the breakthrough will happen, so keep going. It would be a pity to give up just before release comes! Now is the time to break free from habits that have held you and your destiny in captivity. It is an insult to the work of Christ on our behalf if we are not coming into increased victory over the works of the enemy.

Just as we desire and work towards a breakthrough in the spirit realm for a release of more of God in our lives, so Satan is also attempting to penetrate our defenses and gain the victory over us (Eph 4:27; 1 Pet 5:8). Thus we must be always vigilant and spiritually on the defensive as well as on the attack. However, "No weapon formed against you shall prosper…

they have divine power to demolish strongholds” (Isa 54:17; 2 Cor 10:4,5). This makes us undefeatable provided we are aligned with His will and remain in Christ who gained the victory for us. Satan will target our most vulnerable and weak areas, knowing the best time to stage his thrust. The Bible’s message is, “Submit yourselves to God. Resist the devil, and he will flee from you” (Jas 4:7). When there is a measure of release, don’t resort to the flesh, relax your guard or allow Satan to rob you of the full breakthrough.

The confession of the three Hebrew men as they were about to be thrown into the fire was we will still trust and love God even if we don’t get the desired breakthrough (Dan 3:17,18). Will I follow and trust Him with the same dedication, or will I be offended when situations don’t go the way I hoped for? The Lord is all we have to hold on to. Put that much pressure on that the opposition has to yield. Cling tenaciously to your God-given purpose and see the Lord breakthrough on your behalf (2 Sam 5:20).