Sheep are quickly scattered and vulnerable so, in Bible times, during the day, the shepherd continually watched over them to keep them safe from wild animals and natural hazards as there were no fences (1 Sam 17:34,35; Isa 13:14; Zech 13:7; Mt 18:12,13, 26:31). At night the sheep were led back to the safety of the sheepfold, an enclosure where again the shepherd, or another person stayed on guard duty (Lk 2:8; Jn 10:1-10). A good shepherd cares for the sheep and is totally committed to their well-being.

It was for the sheep’s own wellbeing that they recognised and responded to the voice of their master. Often there were small flocks belonging to different shepherds in one locality, and the sheep would learn to distinguish their master’s voice and so follow the right one. Similarly, the ‘Shepherd Psalm’ infers us hearing His voice, coupled with 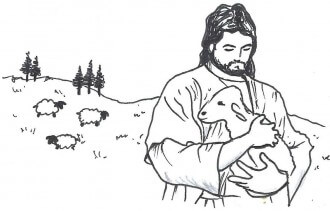 In the Bible the care of a shepherd for his sheep is used as an illustration of God’s care over His people, with Jesus, the Good Shepherd (also called the Great Shepherd and Head Shepherd) who gave His life for the sheep, contrasted to hired helpers who have less devotion (Jn 10:11-13; Heb 13:20,21; 1 Pet 5:4). “The Lord tends His flock like a shepherd, He gathers the lambs in His arms and carries them close to His heart, gently leading those that have young” (Isa 40:11).

Numerous times in Scripture the term shepherd is used figuratively for those who ‘pasture’ human beings in the spiritual sense – they feed and care for them. Paul commanded the church elders to “keep watch over yourselves and all the flock...be shepherds of the church of God” (Act 20:28,29). Part of the shepherd’s responsibility (for which they are held accountable) is to know the condition of their flock, “the sheep of God’s pasture” and to follow in the footsteps of the ‘Great Shepherd’ in caring for them (Prov 27:23; Jer 23:1-4; Ezek 34:2-31). Jesus also saw the crowds as sheep without a shepherd, harassed and helpless – without the spiritual guidance and support they desperately needed as the religious leaders of the day were not fulfilling their role (Mt 9:36).